There is so much greatness to be celebrated on this wonderful day! It has created the most memorable bedtime stories for our family. We also celebrated the day when we were able to begin watching the movies which accompany it with our oldest daughter. It is powerful because it is not just myth or folklore but rather a celebration of world changing historical events.

Over the years of 1516-1517 the church in Rome was raising money to make improvements to St. Peter’s Basilica. The strategy used for raising the funds for this building project was to send out messengers teaching church people that they could purchase souls out of purgatory and into heaven. You might ask, ‘Why would anyone believe that to be true?’ 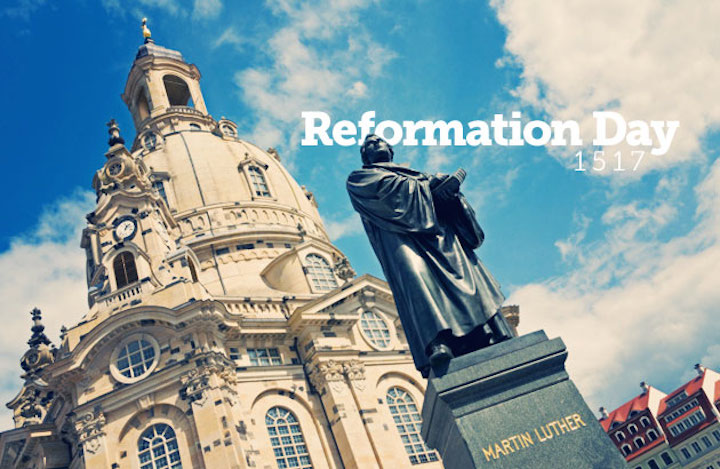 At this time in history, church people did not have access to the Bible. The Bible was only read in Latin by the church leaders and then taught to the people in their native language. This means that the church leaders could teach the people whatever they wanted and say that it was biblical truth.

Martin Luther was a german monk who came up through the church’s schooling system for priests. Luther received his Doctorate in 1512 and went on to teach theology at the University of Wittenberg. While spending his teaching career at the University, God began to give him great unrest with the way the church was treating the people of Germany.

Luther’s unrest came to climax during this building campaign in 1517. It was this marketing slogan of the church that served as the proverbial last straw, “As soon as the coin in the coffer rings, the soul from purgatory springs.” The spiritual unrest in Luther produced what we know to be The 95 Thesis.

On October 31,1517 Martin Luther nailed his writing, The 95 Thesis, to the door of the church in Wittenberg. His message protested the paying of indulgences which directly contradicted the Bible’s teaching of salvation by faith alone. This act by Luther sparked the Protestant Reformation.

It was through these days of controversy that Luther became overwhelmed with the need to get the Bible into the hands of the people. The Protestant Reformation also represents the abuse of power taken from the church leaders of the day by getting the Word of God into the language and hands of the people. In God’s great sovereignty the printing press was invented and made Luther’s writings and Bible translation spread in unprecedented ways.

I love celebrating Reformation Day on October 31st because, amidst so many other things, it led to me being able to experience the presence of Christ through the daily reading of His Word. It brings me hope, joy, and truth daily and I cannot imagine life without it.

God works in amazing ways through the courage and strength of those who stand for truth. Let that be a challenge and encouragement for you today and for your family as we approach this great day!

Matt Powell serves as teaching pastor at Crossings Community Church, a body of believers whose mission is to engage, equip, and empower homes for gospel transformation in Katy, TX.